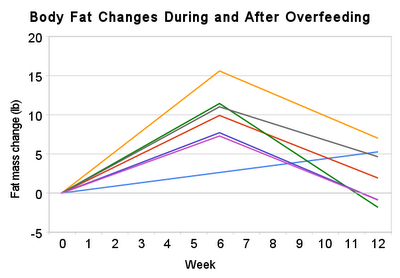 
* The hormone leptin and the hypothalamus are the ringleaders, although there are many other elements involved, such as numerous gut-derived peptides, insulin, and a number of other brain regions.
Posted by Unknown at 7:00 PM No comments:

What Caused the Setpoint to Change?

We have two criteria to narrow our search for the cause of modern fat gain:
Although I believe that exercise is part of a healthy lifestyle, it probably can't explain the increase in fat mass in modern nations. I've written about that here and here. There are various other possible explanations, such as industrial pollutants, a lack of sleep and psychological stress, which may play a role. But I feel that diet is likely to be the primary cause. When you're drinking 20 oz Cokes, bisphenol-A contamination is the least of your worries.

In the last post, I described two mechanisms that may contribute to elevating the body fat set point by causing leptin resistance: inflammation in the hypothalamus, and impaired leptin transport into the brain due to elevated triglycerides. After more reading and discussing it with my mentor, I've decided that the triglyceride hypothesis is on shaky ground*. Nevertheless, it is consistent with certain observations:
Inflammation in the hypothalamus, with accompanying resistance to leptin signaling, has been reported in a number of animal studies of diet-induced obesity. I feel it's likely to occur in humans as well, although the dietary causes are probably different for humans. The hypothalamus is the primary site where leptin acts to regulate fat mass (3). Importantly, preventing inflammation in the brain prevents leptin resistance and obesity in diet-induced obese mice (3.1). The hypothalamus is likely to be the most important site of action. Research is underway on this.

The Role of Digestive Health

What causes inflammation in the hypothalamus? One of the most interesting hypotheses is that increased intestinal permeability allows inflammatory substances to cross into the circulation from the gut, irritating a number of tissues including the hypothalamus.

Dr. Remy Burcelin and his group have spearheaded this research. They've shown that high-fat diets cause obesity in mice, and that they also increase the level of an inflammatory substance called lipopolysaccharide (LPS) in the blood. LPS is produced by gram-negative bacteria in the gut and is one of the main factors that activates the immune system during an infection. Antibiotics that kill gram-negative bacteria in the gut prevent the negative consequences of high-fat feeding in mice.

Burcelin's group showed that infusing LPS into mice on a low-fat chow diet causes them to become obese and insulin resistant just like high-fat fed mice (4). Furthermore, adding 10% of the soluble fiber oligofructose to the high-fat diet prevented the increase in intestinal permeability and also largely prevented the body fat gain and insulin resistance from high-fat feeding (5). Oligofructose is food for friendly gut bacteria and ends up being converted to butyrate and other short-chain fatty acids in the colon. This results in lower intestinal permeability to toxins such as LPS. This is particularly interesting because oligofructose supplements cause fat loss in humans (6).

A recent study showed that blood LPS levels are correlated with body fat, elevated cholesterol and triglycerides, and insulin resistance in humans (7). However, a separate study didn't come to the same conclusion (8). The discrepancy may be due to the fact that LPS isn't the only inflammatory substance to cross the gut lining-- other substances may also be involved. Anything in the blood that shouldn't be there is potentially inflammatory.

The Role of Fatty Acids and Micronutrients

Any time a disease involves inflammation, the first thing that comes to my mind is the balance between omega-6 and omega-3 fats. The modern Western diet is heavily weighted toward omega-6, which are the precursors to some very inflammatory substances (as well as a few that are anti-inflammatory). These substances are essential for health in the correct amounts, but they need to be balanced with omega-3 to prevent excessive and uncontrolled inflammatory responses. Animal models have repeatedly shown that omega-3 deficiency contributes to the fat gain and insulin resistance they develop when fed high-fat diets (9, 10, 11).

As a matter of fact, most of the papers claiming "saturated fat causes this or that in rodents" are actually studying omega-3 deficiency. The "saturated fats" that are typically used in high-fat rodent diets are refined fats from conventionally raised animals, which are very low in omega-3. If you add a bit of omega-3 to these diets, suddenly they don't cause the same metabolic problems, and are generally superior to refined seed oils, even in rodents (12, 13).
I believe that micronutrient deficiency also plays a role. Inadequate vitamin and mineral status can contribute to inflammation and weight gain. Obese people typically show deficiencies in several vitamins and minerals. The problem is that we don't know whether the deficiencies caused the obesity or vice versa. Refined carbohydrates and refined oils are the worst offenders because they're almost completely devoid of micronutrients.

I believe that we have strayed too far from our species' ecological niche, and our health is suffering. One manifestation of that is body fat gain. Many factors probably contribute, but I believe that diet is the most important. A diet heavy in nutrient-poor refined carbohydrates and industrial omega-6 oils, high in gut irritating substances such as gluten and sugar, and a lack of direct sunlight, have caused us to lose the robust digestion and good micronutrient status that characterized our distant ancestors. I believe that one consequence has been the dysregulation of the system that maintains the fat mass "setpoint". This has resulted in an increase in body fat in 20th century affluent nations, and other cultures eating our industrial food products.

In the next post, I'll discuss my thoughts on how to reset the body fat setpoint.

* The ratio of leptin in the serum to leptin in the brain is diminished in obesity, but given that serum leptin is very high in the obese, the absolute level of leptin in the brain is typically not lower than a lean person. Leptin is transported into the brain by a transport mechanism that saturates when serum leptin is not that much higher than the normal level for a lean person. Therefore, the fact that the ratio of serum to brain leptin is higher in the obese does not necessarily reflect a defect in transport, but rather the fact that the mechanism that transports leptin is already at full capacity.

Dr. Ronald Krauss's group just published another article in the American Journal of Clinical Nutrition, this time on the intervention trials examining the effectiveness of reducing saturated fat and/or replacing it with other nutrients, particularly carbohydrate or polyunsaturated seed oils. I don't agree with everything in this article. For example, they cite the Finnish Mental Hospital trial. They openly acknowledge some contradictory data, although they left out the Sydney diet-heart study and the Rose et al. corn oil study, both of which showed greatly increased mortality from replacing animal fats with polyunsaturated seed oils. Nevertheless, they get it right in the end:

Particularly given the differential effects of dietary saturated fats and carbohydrates on concentrations of larger and smaller LDL particles, respectively, dietary efforts to improve the increasing burden of CVD risk associated with atherogenic dyslipidemia should primarily emphasize the limitation of refined carbohydrate intakes and a reduction in excess adiposity.

This is really cool. Krauss is channeling Weston Price. If this keeps up, I may have no reason to blog anymore!
Posted by Unknown at 10:53 AM No comments: