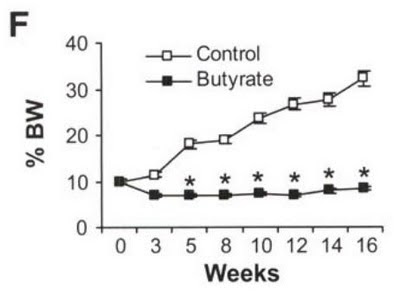 The butyrate-fed mice remained lean and avoided metabolic problems. Butyrate increased their energy expenditure by increasing body heat production and modestly increasing physical activity. It also massively increased the function of their mitochondria, the tiny power plants of the cell.

Butyrate and its derivatives may have potential application in the prevention and treatment of metabolic syndrome in humans.

There's one caveat, however: the butyrate group at less food. Something about the butyrate treatment caused their food intake to decline after 3 weeks, dropping roughly 20% by 10 weeks. The investigators cleverly tried to hide this by normalizing food intake to body weight, making it look like the food intake of the comparison group was dropping as well (when actually it was staying the same as this group was gaining weight).

I found this study thought-provoking, so I looked into butyrate further.

Butyrate Suppresses Inflammation in the Gut and Other Tissues

In most animals, the highest concentration of butyrate is found in the gut. That's because it's produced by intestinal bacteria from carbohydrate that the host cannot digest, such as cellulose and pectin. Indigestible carbohydrate is the main form of dietary fiber.

It turns out, butyrate has been around in the mammalian gut for so long that the lining of our large intestine has evolved to use it as its primary source of energy. It does more than just feed the bowel, however. It also has potent anti-inflammatory and anti-cancer effects. So much so, that investigators are using oral butyrate supplements and butyrate enemas to treat inflammatory bowel diseases such as Crohn's and ulcerative colitis. Investigators are also suggesting that inflammatory bowel disorders may be caused or exacerbated by a deficiency of butyrate in the first place.

Butyrate, and other short-chain fatty acids produced by gut bacteria**, has a remarkable effect on intestinal permeability. In tissue culture and live rats, short-chain fatty acids cause a large and rapid decrease in intestinal permeability. Butyrate, or dietary fiber, prevents the loss of intestinal premeability in rat models of ulcerative colitis. This shows that short-chain fatty acids, including butyrate, play an important role in the maintenance of gut barrier integrity. Impaired gut barrier integrity is associated with many diseases, including fatty liver, heart failure and autoimmune diseases (thanks to Pedro Bastos for this information-- I'll be covering the topic in more detail later).

Butyrate's role doesn't end in the gut. It's absorbed into the circulation, and may exert effects on the rest of the body as well. In human blood immune cells, butyrate is potently anti-inflammatory***.

Certain types of fiber reduce atherosclerosis in animal models, and this effect may be due to butyrate production produced when the fiber is fermented. Fiber intake was associated with lower blood markers of inflammation in the Women's Health Initiative study, and has been repeatedly associated with lower heart attack risk and reduced progression of atherosclerosis in humans. Butyrate also sharply reduces the harmful effects of type 1 diabetes in rats, as does dietary fiber to a lesser extent.

Butyrate increases the function and survival of mice with certain neurodegenerative diseases. Polyglutamine diseases, which are the most common class of genetic neurodegenerative diseases, are delayed in mice treated with butyrate (1, 2, 3). Many of you have probably heard of Huntington's disease, which is the most common of the class. I did my thesis on a polyglutamine disease called SCA7, and this is the first suggestion I've seen that diet may be able to modify its course.

Due to the potent effect butyrate has on a number of bodily processes, I believe it may be a fundamental controller of metabolism, stress resistance and the immune system in mammals, similar to omega-6:3 balance.

An Ancient Line of Communication Between Symbiotic Organisms

Why does butyrate have so much control over inflammation? Let's think about where it comes from. Bacteria in the gut produce it. It's a source of energy, so our bodies take it up readily. It's one of the main molecules that passes from the symbiotic (helpful) bacteria in the gut to the rest of the body. It's only logical that the body would receive butyrate as a signal that there's a thriving colony of symbiotic bacteria in the gut, and induce a tolerance to them. The body may alter its immune response (inflammation) in order to permit a mutually beneficial relationship between itself and its symbionts.

A Change of Heart

Butyrate has caused me to re-think my position on fiber-- which was formerly that it's irrelevant at best. I felt that fiber came along with nutrient-dense whole plant foods, but was not beneficial per se. I believed that the associations between fiber intake and a lower risk of a number of diseases were probably due to the fact that wealthier, more educated, healthier people tend to buy more whole grains, fruit and vegetables. In other words, I believed that fiber intake was associated with better health, but did not contribute to it. I now feel, based on further reading about fiber and short-chain fatty acids like butyrate, that the associations represent a true cause-and-effect relationship.

I also didn't fully appreciate the caloric contribution of fiber to the human diet. In industrialized countries, fiber may contribute 5 to 10 percent of total calorie intake, due to its conversion to short-chain fatty acids like butyrate in the large intestine (free full text). This figure is probably at least twice as high in cultures consuming high-fiber diets. It's interesting to think that "high-carbohydrate" cultures may be getting easily 15 percent of their calories from short-chain fats. Since that isn't recorded in dietary surveys, they may appear more dependent on carbohydrate than they actually are. The Kitavans may be getting more than 30 percent of their total calories from fat, despite the fact that their food is only 21 percent fat when it passes their lips. Their calorie intake may be underestimated as well.

There are two main ways to get butyrate and other short-chain fatty acids. The first is to eat fiber and let your intestinal bacteria do the rest. Whole plant foods such as sweet potatoes, properly prepared whole grains, beans, vegetables, fruit and nuts are good sources of fiber. Refined foods such as white flour, white rice and sugar are very low in fiber. Clinical trials have shown that increasing dietary fiber increases butyrate production, and decreasing fiber decreases it (free full text).

Butyrate also occurs in significant amounts in food. What foods contain butyrate? Hmm, I wonder where the name BUTYR-ate came from? Butter perhaps? Butter is 3-4 percent butyrate, the richest known source. But everyone knows butter is bad for you, right?

After thinking about it, I've decided that butyrate must have been a principal component of Dr. Weston Price's legendary butter oil. Price used this oil in conjunction with high-vitamin cod liver oil to heal tooth decay and a number of other ailments in his patients. The method he used to produce it would have concentrated fats with a low melting temperature, including butyrate, in addition to vitamin K2*****. Thus, the combination of high-vitamin cod liver oil and butter oil would have provided a potent cocktail of fat-soluble vitamins (A, D3, K2), omega-3 fatty acids and butyrate. It's no wonder it was so effective in his patients.


* According to insulin tolerance test.

*** The lowest concentration used in this study, 30 micromolar, is probably higher than the concentration in peripheral serum under normal circumstances. Human serum butyrate is in the range of 4 micromolar in British adults, and 29 micromolar in the hepatic portal vein which brings fats from the digestive tract to the liver (ref). This would likely be at least two-fold higher in populations eating high-fiber diets.