BREAKING NEWS... Just today, a federal judge in Florida ruled that the Obama administration's health care overhaul is unconstitutional, siding with 26 states that sued to block it.

Roger Vinson, a judge in the U.S. District Court in Pensacola, Fla., said in a ruling on State of Florida et al. vs. United States Department of Health and Human Services et al. (Case Number 3:2010-cv-00091-RV), that Congress has no authority under the commerce clause of the U.S. Constitution to enforce the “minimum essential coverage provision” in PPACA.


As we mentioned in our December eNewsletter, this debate appears destined to reach the U.S. Supreme Court. While two other federal judges had upheld the requirement that people buy health insurance or face penalties, Henry E. Hudson of the U.S. District Court in Richmond, Virginia ruled that the insurance mandate violates the Constitution.

"This is obviously a very difficult task. Regardless of how laudable its attempts may have been to accomplish these goals in passing the Act, Congress must operate within the bounds established by the Constitution," Vinson wrote in his 78-page ruling.

President Barack Obama's administration had argued that the health care system was part of the interstate commerce system. They said the government can levy a tax penalty on Americans who decide not to purchase health insurance because all Americans are consumers of medical care.

But attorneys for the states said the administration was effectively forcing the states to participate in the health care overhaul by holding billions of Medicaid dollars hostage. The states also said the federal government is violating the Constitution by forcing a mandate on the states without providing money to pay for it.


Health insurers have argued that they can provide affordable health coverage for all, without basing rates on health status, only if the government requires all people – including relatively young, healthy people – to have health coverage.

PPACA contains many provisions other than the minimum coverage mandate. Vinson says the entire act must be declared void because PPACA is not written in such a way that the coverage mandate can be considered separately from the rest of the act.

There is widespread sentiment for reducing the cost of health care and improving the quality, and the Florida case “is not about whether the Act is wise or unwise legislation,” Vinson says.

“This has been a difficult decision to reach, and I am aware that it will have indeterminable implications,” Vinson says. “At a time when there is virtually unanimous agreement that health care reform is needed in this country, it is hard to invalidate and strike down a statute titled ‘The Patient Protection and Affordable Care Act.’”

Judge Vinson made headlines in December 2010 when he asked during oral arguments on the Florida case whether Congress had the authority to impose a PPACA broccoli-eating mandate.

Surely one of our former Presidents was offended by that, you know the one that wouldn't eat his broccoli.


The turn of the year always brings changes to Medicare benefits… but this year wealthier people get a special change to their Part D premium to reward them for their high income.

So what’s the change? Starting January 1, 2011, Medicare beneficiaries face a new income related monthly adjustment amount (IRMAA) to their Medicare Part D premiums. Depending on income as filed on the 2009 tax return, an additional sum may be due each month: 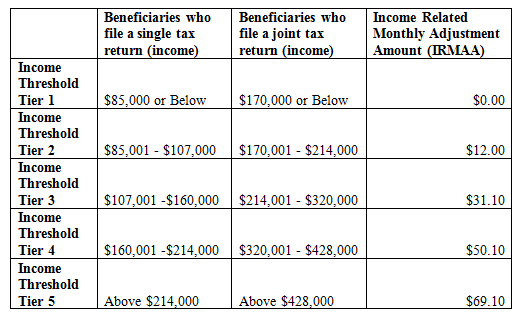 How will you know for certain what you will be required to pay? The Social Security Administration will send you a letter in the mail notifying you of the extra amount that must be paid for the IRMAA.

The surcharge on your Medicare Part D premium is NOT to be paid to the provider of your Part D drug plan. Regardless of the method used to submit normal Part D premiums to your insurance provider, the extra monthly cost required by the IRMAA will be collected by the Social Security Administration. Please remember, if you do not have a Medicare Part D drug plan, you will not have to pay any extra money in Medicare premiums.