Rabbits on a High-Saturated Fat Diet Without Added Cholesterol

I just saw another study that supports my previous post Animal Models of Atherosclerosis: LDL. The hypothesis is that in the absence of excessive added dietary cholesterol, saturated fat does not influence LDL or atherosclerosis in animal models, relative to other fats (although omega-6 polyunsaturated oils do lower LDL in some animal models). This appears to be consistent with what we see in humans.

In this study, they fed four groups of rabbits different diets:
LDL at 6 months was the same in groups 1, 3 and 4, but was increased more than 20-fold in group 2. It's not the fat, it's the fact that they're overloading herbivores with dietary cholesterol! 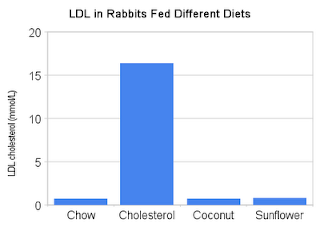 This supports the idea that saturated fat does not inherently increase LDL, and in fact in most animals it does not. This appears to be the case in humans as well, where long-term trials have shown no difference in LDL between people eating more saturated fat and people eating less, on timescales of one year or more (some short trials show a modest LDL-raising effect, but even this appears to be due to an increase in particle size rather than particle number). Since these trials represent the average of many people, they may hide some individual variability: it may actually increase LDL in some people and decrease it in others.

Merry Christmas!
Posted by Unknown at 10:00 AM