The Timeline of Fat Gain

Modern humans are unusual mammals in that fat mass varies greatly between individuals. Some animals carry a large amount of fat for a specific purpose, such as hibernation or migration. But all individuals of the same sex and social position will carry approximately the same amount of fat at any given time of year. Likewise, in hunter-gatherer societies worldwide, there isn't much variation in body weight-- nearly everyone is lean. Not necessarily lean like Usain Bolt, but not overweight.
Although overweight and obesity occurred forty years ago in the U.S. and U.K., they were much less common than today, particularly in children. Here are data from the U.S. Centers for Disease Control NHANES surveys (from this post): 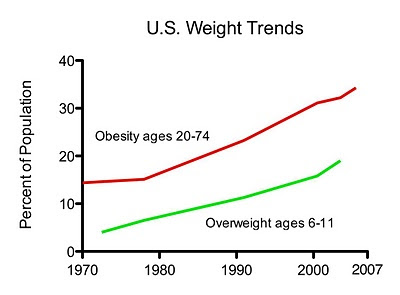 Together, this shows that a) leanness is the most natural condition for the human body, and b) something about our changing environment, not our genes, has caused our body fat to grow.

In the last post, I described how the body regulates fat mass, attempting to keep it within a narrow window or "setpoint". Body fat produces a hormone called leptin, which signals to the brain and other organs to decrease appetite, increase the metabolic rate and increase physical activity. More fat means more leptin, which then causes the extra fat to be burned. The little glitch is that some people become resistant to leptin, so that their brain doesn't hear the fat tissue screaming that it's already full. Leptin resistance nearly always accompanies obesity, because it's a precondition of significant fat gain. If a person weren't leptin resistant, he wouldn't have the ability to gain more than a few pounds of fat without heroic overeating (which is very very unpleasant when your brain is telling you to stop). Animal models of leptin resistance develop something that resembles human metabolic syndrome (abdominal obesity, blood lipid abnormalities, insulin resistance, high blood pressure).

The Role of the Hypothalamus

There are three leading explanations at this point that are not mutually exclusive. One is cellular stress in the endoplasmic reticulum, a structure inside the cell that's used for protein synthesis and folding. I've read the most recent paper on this in detail, and I found it unconvincing (2). I'm open to the idea, but it needs more rigorous support.

The other possibility is that leptin simply isn't reaching the hypothalamus. The brain is a unique organ. It's enclosed by the blood-brain barrier (BBB), which greatly restricts what can enter and leave it. Both insulin and leptin are actively transported across the BBB. It's been known for a decade that obesity in rodents is associated with a lower rate of leptin transport across the BBB (5, 6).

In the next post, I'll get more specific about what factors could be causing hypothalamic inflammation and/or reduced leptin transport across the BBB. I'll also discuss some ideas on how to reduce leptin resistance sustainably through diet and exercise.


* This is accomplished by feeding them sad little pellets that look like greasy chalk. They're made up mostly of lard, soybean oil, casein, maltodextrin or cornstarch, sugar, vitamins and minerals (this is a link to the the most commonly used diet for inducing obesity in rodents). Food doesn't get any more refined than this stuff, and adding just about anything to it, from fiber to fruit extracts, makes it less damaging.
** Fibrates are PPAR agonists, so the weight loss could also be due to something besides the reduction in triglycerides.
Posted by Unknown at 12:00 PM